Connections between starvation and immunological memory

Researchers at Emory have been revealing several connections between cellsâ€™ responses to starvation and immunological memory. The latest example of this is a paper in Nature Immunology from Rafi Ahmedâ€™s lab, showing that the cellular process of autophagy (literally: self-consumption) is essential for forming and maintaining memory T cells.

This finding has some practical implications for vaccination and could point the way to additives that could boost vaccine effectiveness in elderly humans. Researchers at Oxford have demonstrated that autophagy is diminished in T cells from aged mice, and T cell responses could be boosted in older mice using the autophagy-inducing compound spermidine. END_OF_DOCUMENT_TOKEN_TO_BE_REPLACED

Posted on December 18, 2014 by Quinn Eastman in Immunology Leave a comment

Immunologists reported recently that the drug rapamycin, normally used to restrain the immune system after organ transplant, has the unexpected ability to broaden the activity of a flu vaccine.

The results, published in Nature Immunology, indicate that rapamycin steers immune cells away from producing antibodies that strongly target a particular flu strain, in favor of those that block a wide variety of strains. The results could help in the effort to develop a universal flu vaccine.

Posted on November 5, 2013 by Quinn Eastman in Immunology Leave a comment

This week, breast cancer researchers have been reporting encouraging clinical trial results with the drug everolimus at the San Antonio Breast Cancer Symposium. Everolimus is a mTOR inhibitor, first approved by the FDA for treatment of kidney cancer and then for post-transplant control of the immune system.

Ruth O’Regan, MD, director of the Translational Breast Cancer Research Program at Winship Cancer Institute, has led clinical studies of everolimusÂ in breast cancerÂ and has championed the strategy of combining mTOR inhibitors with current treatments for breast cancer.

She recently explained the rationale to the NCI Cancer Bulletin:

She views the combination therapy as a potential alternative to chemotherapy for treating ER-positive advanced breast cancer when hormonal therapies have stopped working.

Posted on December 9, 2011 by Quinn Eastman in Cancer Leave a comment 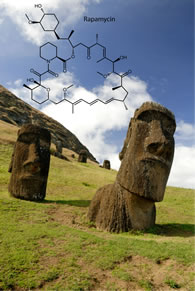