A Sherer of Parkinson’s research

The name of the guest speaker at Emoryâ€™s Office of Technology Transferâ€™s annual celebration on March 7 provoked some double takes around campus last week.

Todd B. Sherer, PhD, CEO of the Michael J. Fox Foundation for Parkinsonâ€™s Research (MJFF), described how the Fox Foundation is trying to build bridges between the worlds of basic and clinical research to speed development of new drugs for the treatment of Parkinsonâ€™s disease, and offered a ray ban outlet perspective on how independent research funders can help move drug candidates from the lab to the clinic and closer to market.

Sherer, a former postdoctoral fellow at Emory, also has the same first and last name (but not middle initial!) as OTTâ€™s director. Sherer â€“ the one who works for the Fox Foundation â€“ joined that non-profit charityâ€™s staff in 2004. While at Emory, he worked on models for Parkinsonâ€™s based on exposure to the pesticide rotenone, alongside Ranjita Betarbet, Gary Miller and J. Timothy Greenamyre, who himself moved on to the University of Pittsburgh in 2005.

END_OF_DOCUMENT_TOKEN_TO_BE_REPLACED

Posted on March 13, 2013 by Quinn Eastman in Neuro Leave a comment

On the FastTrac to entrepreneurship

A recent feature in Nature Jobs highlights the growing trend of entrepreneurship training for scientists. Emory’s Office of Technology Transfer, together with their counterparts at UGA and Georgia Tech, organized a six week FastTrac entrepreneurship course which just wrapped up last week. 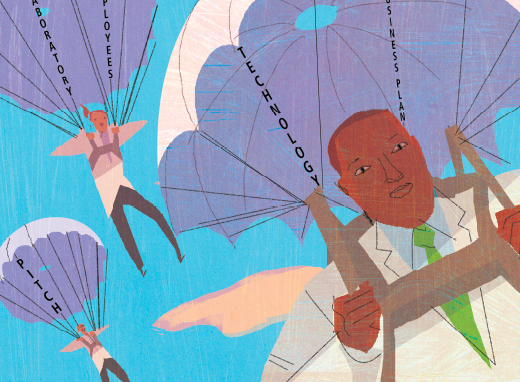 An article in Emory Medicine describes this course, which was also offered in the spring.

Posted on October 19, 2012 by Quinn Eastman in Uncategorized 1 Comment

The next generation of biomedical engineering innovators

Congratulations to the winners of the InVenture innovation competition at Georgia Tech. The competition aired Wednesday night on Georgia Public Broadcasting. The winners get cash prizes, a free patent filing and commercialization service through Georgia Tech’s Office of Technology Transfer.

Several of the teams have Emory connections, through the Wallace H. Coulter Department of Biomedical Engineering at Georgia Tech and Emory, and the Atlanta Clinical & Translational Science Institute.

Emergency medical professionals know that intubation can be rough. The second place ($10,000)Â MAID team created a “magnetic assisted intubation device” that helps them place a breathing tube into the trachea in a smoother way. The MAID was designed by Alex Cooper, Shawna Hagen, William Thompson and Elizabeth Flanagan, all biomedical engineering majors. Their clinical advisor was Brian Morse, MD, previously a trauma fellow and now an Emory School of Medicine surgical critical care resident at Grady Memorial Hospital.

“When I first saw the device that the students had developed, I was blown away,” Morse told the Technique newspaper. “It’s probably going to change the way we look at intubation in the next five to 10 years.”

The AutoRhexis team, which won the People’s Choice award ($5,000), invented a device to perform the most difficult step during cataract removal surgery. It was designed by a team of biomedical and mechanical engineering majors: Chris Giardina, Rebeca Bowden, Jorge Baro, Kanitha Kim, Khaled Kashlan and Shane Saunders. They were advised by Tim Johnson, MD, who was an Emory medical student and is now a resident at Columbus Regional Medical Center.

Posted on March 11, 2011 by Quinn Eastman in Uncategorized Leave a comment

Studies have consistently found that cardiopulmonary resuscitation (CPR) performed immediately by a bystander doubles or even triples a cardiac arrest victimâ€™s chance of survival.

To increase the rate of bystander CPR, the American Heart Association recently modified its CPR guidelines so that it is now permissible to provide continual chest compressions without mouth-to-mouth rescue breathing. This makes CPR easier and may even produce better results.

Arthur Kellermann, MD, MPH, formerly an emergency medicine physician and associate dean for public policy at Emory, and David Sanborn, a mechanical engineer at Georgia Tech, have invented a low-cost CPR manikin to help anyone learn and practice compression-only CPR. Kellermann currently is director of the Program in Public Health Systems and Preparedness and Paul Oâ€™Neill-Alcoa Chair in Policy Analysis at the RAND Corporation in Virginia.

Their work builds on Emory research that showed laypeople could teach themselves CPR at home using a 25-minute video with results that are comparable to taking a four-hour course taught by a professional instructor.

END_OF_DOCUMENT_TOKEN_TO_BE_REPLACED

Posted on May 6, 2010 by admin in Uncategorized Leave a comment