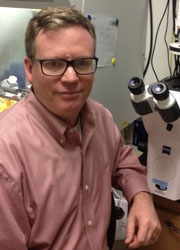 “We think that creating a vaccine for the common cold can be reduced to technical challenges related to manufacturing,” says Martin Moore, PhD, associate professor of pediatrics at Emory University School of Medicine and Children’s Healthcare of Atlanta. END_OF_DOCUMENT_TOKEN_TO_BE_REPLACED

The cure word, as applied to HIV

HIV researchers are becoming increasingly bold about using the “cure” word in reference to HIV/AIDS, even though nobody has been cured besides the “Berlin patient,” Timothy Brown, who had a fortuitous combination of hematopoetic stem cell transplant from a genetically HIV-resistant donor. Sometimes researchers use the term “functional cure,” meaning under control without drugs, to be distinct from “sterilizing cure” or “eradication,” meaning the virus is gone from the body. A substantial obstacle is that HIV integrates into the DNA of some white blood cells.

HIV cure research is part of the $35.6 million, five-year grant recently awarded by the National Institutes of Health to Yerkes/Emory Vaccine Center/Emory Center for AIDS Research. Using the “shock and kill” approach during antiviral drug therapy, researchers will force HIV (or its stand-in in non-human primate research, SIV) to come out of hiding from its reservoirs in the body. The team plans to test novel “latency reversing agents” and then combine the best one with immunotherapeutic drugs, such as PD-1 blockers, and therapeutic vaccines.

Posted on July 18, 2016 by Quinn Eastman in Immunology Leave a comment

Congratulations to Richard Compans, PhD, who delivered the Dean’s Distinguished Faculty Lecture on May 12, joining a select group of Emory researchers who have received this award. After Dean Chris Larsen presented the award, Compans also received a Catalyst award from the Georgia Research Alliance, presented by GRA President and CEO Mike Cassidy.

At Emory, Compans has led research on ways to improve influenza vaccination, such as vaccines based on non-infectious virus-like particles and microneedle patches for delivery (now being tested clinically). The 2009 H1N1 flu epidemic, as well as concern about pandemic avian flu, have meant that Compans’ work has received considerable attention in the last several years. In his talk, he also discussed his early work on the structure of influenza virus, the virus’s complex ecology, and the limitations of current flu vaccines.

Compans was recruited to Emory from UAB in 1992 and was chair of Emory’s microbiology and immunology department for more than a decade. He was also instrumental in recruiting Rafi Ahmed to establish and lead the Emory Vaccine Center. He is now co-principal investigator of the Emory-UGA Center of Excellence for Influenza Research and Surveillance.

Some recent papers that illustrate the extent of Compans’ influence: END_OF_DOCUMENT_TOKEN_TO_BE_REPLACED

Posted on May 20, 2016 by Quinn Eastman in Immunology Leave a comment 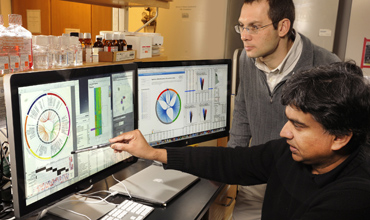 This week, researchers from Yerkes and Emory Vaccine Center led by Cindy Derdeyn published a paper that I first thought was disturbing. It describes how monkeys vaccinated against HIV’s relative SIV (simian immunodeficiency virus) still become infected when challenged with the virus. Moreover, it’s not clear whetherÂ the vaccine-induced antibodies are exerting any selective pressure on the virus that gets through.

But then I realized that this might beÂ an example of “burying the lead,” since we haven’t made a big hoopla about the underlying vaccineÂ studies, conducted by Rama Amara. Some of these studiesÂ showed that a majority of monkeys can beÂ protected from repeated viral challenge.Â TheÂ more effective vaccine regimens include adjuvants such asÂ the immune-stimulating molecules GM-CSF or CD40LÂ (links are the papers on the protective effects). END_OF_DOCUMENT_TOKEN_TO_BE_REPLACED

Posted on August 13, 2015 by Quinn Eastman in Immunology Leave a comment

The scientists in the lab of Richard Compans, PhD, professor of microbiology and immunology at Emory, are hard at work, imagining the unimaginable: A time when patients can self-administer flu vaccines. A time when vaccination does not require exposure to inactive viruses. A time when a universal vaccine could protect from all varieties of influenza: swine, avian, seasonal and strains still emerging.

But it’s not just hope that motivates them as they work. Emory’s scientists are fighting the clock against another possible future: a time of pandemic and uncontrollable virus mutation. The recent emergence of H1N1 and H5N1, known colloquially as swine flu and avian flu, have added an even greater sense of urgency to their task.

“The H5N1â€”the virus derived from avian speciesâ€”has a 60 percent mortality,” says Emory microbiologist Sang-Moo Kang, PhD. Yet that strain of influenza hasn’t resulted in many human deaths, because, so far, avian flu spreads only to humans who are in contact with infected birds.

END_OF_DOCUMENT_TOKEN_TO_BE_REPLACED

Posted on April 12, 2010 by admin in Immunology Leave a comment

Paris “Hands Over” to Atlanta for AIDS Vaccine 2010

As the AIDS Vaccine 2009 conference concluded today in Paris with more than 1,000 scientists in attendance, Eric Hunter, PhD, co-director of the Emory Center for AIDS Research (CFAR) and a Georgia Research Alliance Eminent Scholar, accepted the â€œhand overâ€ for next yearâ€™s international conference in Atlanta.

The Emory CFAR will serve as local Atlanta host of AIDS Vaccine 2010, which takes place next Sept. 28 to Oct. 1, led by the Global HIV Vaccine Enterprise. The conference will bring scientists, community advocates, funders and policy makers from around the world to Atlanta to hear cutting edge scientific results, exchange new ideas, educate future leaders and engage a diverse group of scientists in the quest for an AIDS vaccine.

A number of Emory scientists were in attendance in Paris at AIDS Vaccine 2009. Hunter was interviewed by several news organizations, including the Lehrer News Hour and Science magazine, about the results of a recently concluded AIDS vaccine trial conducted by the United States and Thailand. The complete results of the trial were released at the meeting and also published online this week by the New England Journal of Medicine.

Hunter was among 22 scientists who initially had criticized the trial in a 2004 Science editorial. After seeing the full results and analysis of the trial this week, Hunter commented from the Paris meeting:

â€œThe complete data from the trial indicate that it was modestly effective in preventing HIV-1 infection. However, it will likely be difficult to establish the mechanism by which the vaccine protected participants and additional studies will be needed. This positive result, though, gives a much needed boost to efforts aimed at developing an HIV-1 vaccine and takes the field from the position of perhaps an impossible goal to a possible goal.â€

Posted on October 22, 2009 by admin in Uncategorized Leave a comment

HIV doesn’t have a brain and it doesn’t strategize.

But the way that the virus mutates and evades the immune system in the early part of an infection, you might think it did.

Emory Vaccine Center researcher Cynthia Derdeyn and her colleagues have a new paper in PLOS Pathogens that is a reality check for researchers designing possible HIV vaccines. The results come from a collaboration with the Rwanda Zambia HIV Research Group. (Although the patients in this paper are from Zambia only.)

Red and green depict the parts of the HIV envelope protein that mutated in two patients (185F and 205F) in response to pressure from their immune systems.

Recently there has been some excitement over the discovery of robust neutralizing antibodies in patients.

The bottom line, according to Derdeyn’s team: even if a vaccine succeeds in stimulating antibodies that can neutralize HIV, the virus is still going to mutate furiously and may escape those antibodies. To resist HIV, someone’s immune system may need to have several types of antibodies ready to go, their results suggest.

A companion paper in the same issue of PLOS Pathogens from South African scientists has similarly bracing results.

Posted on September 22, 2009 by Quinn Eastman in Immunology Leave a comment