Drugs that interfere with bile acid recycling can prevent several aspects of NASH (nonalcoholic steatohepatitis) in mice fed a high-fat diet, scientists from Emory University School of Medicine and Children’s Healthcare of Atlanta have shown.

The findings suggest that these drugs, known as ASBT inhibitors, could be a viable clinical strategy to address NASH, an increasingly common liver disease. The results were published in Science Translational Medicine on September 21, 2016.

“By targeting a process that takes place in the intestine, we can improve liver function and reduce insulin resistance in a mouse model of NASH,” says senior author Saul Karpen, MD, PhD. “We can even get fat levels in the liver down to what we see in mice fed a regular diet. These are promising results that need additional confirmation in human clinical trials.”

Karpen is Raymond F. Schinazi distinguished professor of pediatrics at Emory University School of Medicine and chief of the Division of Pediatric Gastroenterology, Hepatology and Nutrition at Children’s Healthcare of Atlanta. He and Paul Dawson, PhD, Emory professor of pediatrics, jointly run a lab that investigates the role of bile acids in liver disease. 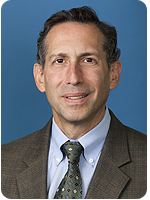 Many people in developed countries have non-alcoholic fatty liver disease, an accumulation of fat in the liver that is linked to diet and obesity. Fatty liver disease confers an elevated risk of type II diabetes and heart disease. NASH is a more severe inflammation of the liver that can progress to cirrhosis, and is a rising indication for liver transplant. Besides diet and exercise, there are no medical treatments for NASH, which affects an estimated 2 to 5 percent of Americans.

Bile acids are produced from cholesterol in the liver. They facilitate the absorption of fats in the intestines, and also regulate metabolism throughout the body. After a meal, bile acids are recycled from the small intestine back to the liver. The ASBT (apical sodium-dependent bile acid transporter) is a protein in the lining of the cells of the distal intestine.

If ASBT function is blocked by drugs, the liver is forced to use cholesterol to make more bile acids. Thus, ASBT (also known as IBAT, for ileal bile acid transport) inhibitors were once contenders as potential drugs to control blood cholesterol levels, before the advent of statins.

Researchers led by Karpen and Dawson wanted to test the effects of an ASBT inhibitor in a mouse model of NASH. To simulate the high-fat and high-sugar diet common in Western countries, mice were given a diet with 45 percent of the calories in fat and extra cholesterol, along with water sweetened with 4 percent sugar – analogous to soft drinks. After 16 weeks of this diet, the mice had gained a small amount of weight and had fat deposition and inflammation in their livers. The mice also became glucose intolerant, a sign of diabetes.

Giving the mice an ASBT inhibitor for 16 weeks along with the high-fat/high-sugar diet prevented the fat accumulation and inflammation in their livers. The levels of triglycerides and cholesterol in the livers of drug-treated mice were more than ten times less than untreated mice, and similar to levels in mice fed a regular low fat diet. The drug also restored their glucose tolerance and improved insulin resistance.

Treating the mice with an ASBT inhibitor for only the last 4 of the 16 weeks reduced the sizes of their livers, but liver fat deposition and glucose tolerance were not affected. The abbreviated treatment did reduce levels of liver triglycerides and cholesterol.

“This shows that a short course of ASBT inhibition can partially reverse some of the effects of the high-fat, high-sugar diet, once liver disease is well established,” Karpen says. “Longer periods of intervention and other models of NASH need to be studied as well.”

“Targeting bile acid-related pathways may have real therapeutic potential, though there is still much to learn,” Dawson says.

How ASBT inhibitors exert their effects on the liver is still unresolved. The research team analyzed alterations in the patterns of genes turned on and off in the liver, seeing patterns linked to altered fat metabolism and less inflammation.

Forcing the liver to consume cholesterol changed the mix of circulating bile acids in the body, in a way that appeared to improve fat metabolism. A regulatory protein called FXR responds to some bile acids, and nudging FXR is at least part of the story, Karpen says. In addition, a shift in the spectrum of bile acids may also have complex interactions with the microbiome, he says.

Several drug strategies are being developed against NASH. A clinical trial of an ASBT inhibitor is underway. A separate clinical trial of a synthetic bile acid for NASH (obeticholic acid) recently showed beneficial effects on the liver, but also elevated cholesterol.

In contrast, Karpen notes that ASBT inhibitors could be expected to reduce blood cholesterol, given researchers’ previous experience with them. However, ASBT inhibition may interfere with bile acid recirculation, leading to unpleasant side effects such as diarrhea in some people, but this is usually self-limiting, he says. ASBT inhibitors have been studied clinically for the treatment of constipation and for cholestatic liver disease.

“What’s remarkable about ASBT inhibition is that it targets a molecule that is confined to the intestine, and can have positive effects in the liver and beyond,” Karpen says. “It is unlikely that one drug for NASH will help everybody, but this could become a effective component of care for many people.”

Research associate Anuradha Rao, PhD is the first author of the paper. The research in Karpen’s and Dawson’s laboratory was supported by the National Institute of Diabetes and Digestive and Kidney Diseases (DK56239, DK047987).